India has a “Tropical Monsoon” type of climate, which means there are different types of seasons in India like summer, monsoon, winter & spring. 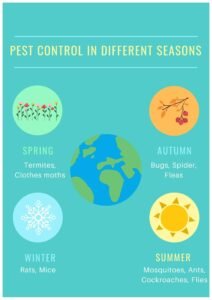 This is because a greater part of India lies within the torrid zone and its climate is bigger influenced by the monsoon winds. The country is one o

f the few countries that face different variations in terms of seasons.

There are six seasons are commonly found in India. Besides, the intensity of every season varies hanging on the terrain and other factors like topography, latitude, longitude, etc.

Each season transpires at different times covering the entire year. The average time of every season differs from two to three months. Thus, different seasons of the year bring different pest problems.

Because most pests have known habits, which can be planned before they become a problem.

Understanding which pests are prevalent at different times helps you develop an effective pest-control strategy.

Goodbye Pest has trained professionals in Kolkata Pest Control who keep your home protected from pests throughout every season. The following are the pests that occur.

In spring, termites begin mating and building new spaces for themselves. This is their breeding season, warm weather, especially after rain is suitable for their breeding purposes.

Springtime is the season where moths begin to breed. The larvae are responsible for the dagames fabrics and clothes whereas moths are dormant.

There are other varieties of spring pests include sting insects, ants and cockroaches, during a cold spring, rodents are also visible.

Mosquitoes become very common in summer. The warm weather is the period in summer when mosquitoes lay their eggs. Mosquito bites can lead to irritating itches

Ants start to grow at the beginning of the spring season, but it is the month of summer when they become a serious problem. They begin to breed and build new colonies. By the end of July swarm of ants is visible.

Cockroaches are a major problem throughout the year, their breeding season is in the month of summer. A cockroach infestation brings several problems to health and hygiene, these are transmitted to food and in some cases lead to allergic reactions.

Flies also breed during the summer, and they are visible in large swarms during these months. They are a great problem in this season and spreads several kinds of disease. Restrict flies is very much necessary to spread pandemics.

These bugs, as their name suggests, can raise quite a stink if they infest your buildings.

In the month of autumn, spiders tend to maneuver indoors in search of heat. Also, this is a prime mating time for spiders. Their sting can be poisonous.

Most pests move indoors during the autumn, checking out warmth, shelter and food. Fleas can become a significant problem for pet owners.

Rats are possibly the foremost serious winter pest because they will cause tons of injury to property and spread dangerous diseases. Rats are powerful rodents and may damage electrical machinery, resulting in production problems and safety risks.

Mice also migrate inside at this point of the year, look for shelter and food. They usually destroy paper and fabrics, goods, and destroy electric wires, causing property damage.